The other day I recieved a promotion copy of XLC wargame terrain and last night saw me trying to put it together. Warning use decent wood glue as woke up this morning to find mine hadn’t stuck very well at all.

So far the kit looks great but could have done with a few more floor connectors. 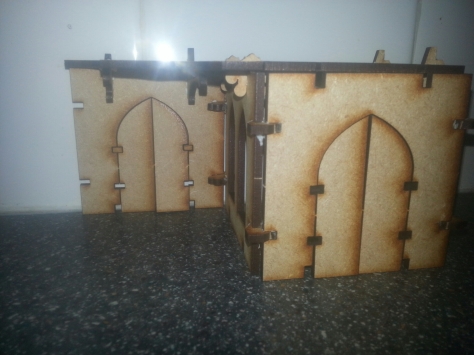 Look at thise minis. Some great painting skills there

I’ve now painted all the Legion of Everblight miniatures that I own which makes a force with the somewhat random total of 33 points. I don’t think I’ve ever played a game with this exact combination of pieces (four Shredders seems excessive unless you have some specific plan, which I certainly do not in WarmaHordes) but they are a legal force in this set up. Thanks to Hosercanadian for commenting that I should do this.

My new aquisition this month was Spartan Games Dystopian Wars. Now you may have seen that I have featured a lot off releases for Spartan Games. Mainly they are updating thier games from versiin 1 to version 2 and at the same time redoing all thier box sets.

Weighing in at £80 rrp its the dearest game on the market eclipsing even Games Workshop products but what do you get with it. Well the full list is published on thier site but basically you get everything to play straight out of the box.

What sets this box set apart is the resin models that need very little trimming and are just lush. The level of detail on each model is second to none.

The rule book, which isnt the full comadore edition,  but includes everything except points values for all the fleets, is well laid out and the rules are easy to follow. Also included is a booklet with a series of scenarios ranging from a race to a full battle. Each scenario introduces a few new rules and is an easy way to start learning the mechanisms of the games.

The final part of the bix is a few pieces of cardboard scenery. Which although printed on card allow a bit of depth to the tabletop battlefield straight out of the box.

Here is a close up work in progress of two of the models just to show you the level of detail.

Now it doesn’t matter if your a league player or a casual player you all have a lot in common. The most important being the rules.

Over the course of my hobby and setting this endevour up I have been fortunate enough to meet plenty of people with a spare force for thier game and the patience and passion to play a few ‘demo’ games, in the case of Dystopian wars my demo game was infact the first round of a tournament.

Now being new to most of these games and as have yet to play 7th edition Warhammer 40k I suppose it should be new to all these rule sets this is a more broad stroke observation about those books we all poor over.

Firstly brands tend to stay quite similar. After a few games of deadzone I felt quite comfortable playing Dreadball. Will be looking at warzone later hopefully. Spartan games Dysopian Wars and Firestorm Armada are very similar with the obvious differances one is in space one is on land/sea/air but other thab that the same mechanics.

Mantic games deadzone and dreadball at first seem like they should have radically different rules, but the activations, extra dice and the whole ‘no modifying what you need to roll just modify hiw many dice you can roll’ is my favourite mechanic for dealing for things like cover shoots generally everything. It makes the game move quicker and smoother.

Finally we have the 7th edition rulebook of 40k. Now there are a lot of issues with this but most are not to do with the actual rules but the company and there strategy, but the rules that were broken seem to remain broken, new stuff has been added (pyshcic phase is back) and non broken rules have now been broken. It seems to be the old three steps forward to steps back but as you rollded a double one you need to take another step back. The reason I say thus is I lkke ravenwing armies (up to 3+ jinj save) but now aftwr that I can onky snap shot! Seriously from a formation that is specialised for bike fighting this seems ridiculous.

Dropzone commander however uses the same base mechanics as GW ie modigying what you need to roll to do things, but it works and is kept simply.

But thats digressing slightly I am finding myself more drawn away from the tombs of games workshop and towards the tombs of other rule sets that play better. Isnt that what we want a good flowing game? Thise cinematically crafted stratergies that we tansform in our heads to the big screen.

In my mind there is no clear winners on rule crafting but there is definite examples of how not to do things.

You know the saying if it isnt broke don’t fix it! This is what that saying was invented for.

Here is a small guide step by step How I am painting my Federation if American States fleet for dystopian wars.

Clean the models of any flashing or imperfections, wash the models in warm soapy water to get rid of any releasing agent off the model. Once the models are dry you will need to undercoat them this will give the later layers of paint a nuch better surface to adhere to, and if they chip should only leave a black scratch not a white one.

Now you have prepared the model in stage one we can move on to the fun part. Base Painting. Fir my FSA fleet I have decided on a very grey colour scheme so my base for the ship is eshin grey and for the water I will be using macragge blue.

Following on the new Dystopian Wars Naval and Armoured Battle Groups, July sees the launch of new Aerial Battle Groups that are optimised for play with the v2.0 rulebook!

All existing Naval, Armoured and Aerial battle groups are fully compatible with the v2.0 rules. We have ensured that ALL models in Dystopian Wars are carried across to the version 2.0 rule set and are fully supported.

Last night I took part in my first demonstration game of dropzone Commander. Needless to say as in all demo games I have played I won, unfortunately this doesnt translate into wins after I have the game myself, dont know how that works.

Playing as the bad guys for a change was quite liberating and apparently I have a devious underhanded mind when it comes to tactics. Needless to say this game has jumped up on my wishlist having seen some of the miniatures available.

So its nearly the weekend what are your plans for world domination?

Tonight sees me enter the Dropzone commander arena. Hopefully that will be one purchase for friday then its a hard choice on dystopian wars firestorm armada or maybe something else entirely. If I get Dystopian Wars odds on I can sell half the set and get nearly half the cash back (and then buy dreadball) choices.

What would your choice be and why?