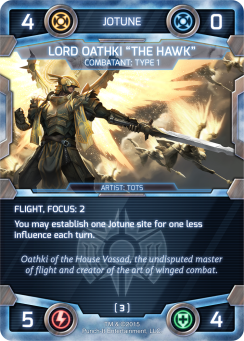 So recently I had a revelation!  I found a game that was funded on kickstarter that will ship very shortly the world over and genuinely seems head and shoulders above the crowd.  With a focus on head-to-head play which I prefer from a card game and innovative mechanics this looks very much like my kind of game.

The game is Battle for Sularia and it’s setting is a rich science fiction world full of potential conflicts and new threats.  The main focus is the battle between the genetically enhanced Jotune and the Synthien, a race of intelligent machines emancipated by the first self-aware slave Animus Vox.  He now pits his intellect against Lord Oathki, leader of the Jotune forces in a battle for the lifeblood of both societies; Sularium.  The background is designed by self confessed sci-fi fans Jesse Bergman and John Kimmel and they’ve contrived to create an absorbing background that riffs on our own dependence upon fossil fuels.

Mechanically the game looks as if it plays quite differently from other CCGS.  Each turn players place a single card into play face down as influence.  This influence is used to build structures which in turn gather the solarium you need to muster your forces for the attack.  Interestingly (and sensible thematically) you launch your attacks against structures which can be defended but also defend themselves.  From what I’ve seen the game builds in momentum from a steady start to a full-blown blood-soaked battle in only a few turns and this fits the background perfectly.  War is short and bloody on Sularia. 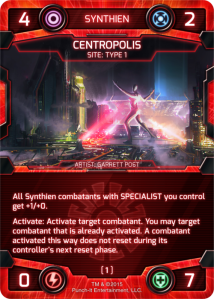 Something that I’m always keen on is the ability for all players to game on a level  field and the unique 60/90 deck building rule is something I can get behind.  All too often I was on the receiving end of an “expensive deck beat down” when I started playing TCGs and I have since handed out more than a few so anything that genuinely tests a players deck building ability and lets new players not get “out spent” is a good plan.  The system is so simple I can’t believe nobody else does it, each card has a value which you add up whilst deck building and as long as you come to sixty cards and ninety (or less) points then your deck is legal.  Jesse describes the decision as a necessity to make the game as “diverse and as open ended and exciting as its rich lore”.  War is fairer on Sularia too it appears!

Going forwards there are plans to inject more cards before the summer with kickstarter backing again.  These two expansions; a 56 card Command Pack and a further Faction Pack adding, as the name suggests, more factions to the game will both contain full playsets so that in the style of the LCGs each player will have access to all of the same deck building resources.  This combined with the squad building element should make any competitive scene a fascinating prospect where knowledge and skill rule over the wallet – “Brewers Rejoice”!

The artwork is stunningly beautiful and is clearly something that the designers Punch-It entertainment have been very keen to ensure is of the highest standard but this game is far from just another pretty face.  With superb back story (seriously, read it yourself because even if you don’t buy it the fiction is worth reading), genuinely impressive new mechanics and huge potential plus it’s absurdly cheap for what you get; $24.99 for the rules, two starter decks and full playsets of those cards for deck construction and four player drafting seems ridiculous.   I’ve pre-ordered mine and can’t wait to let you guys know my thoughts on how the game plays out!  Find there website here!

4 thoughts on “Battle Begins! Well, it will in December!”