Ok so they’re not even a little bit midnight yet but I couldn’t resist gluing up my Night Raptor conversions!

Built around the Chaos Raptor / Warp Talons box they use the legs, torsos and jump packs of the 41st Millennium with a lot of Forge World components.  I wanted to maintain the Mark IV look and lose a lot of ‘demonicness’ for the sake of continuity. 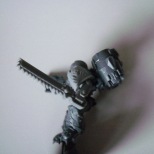 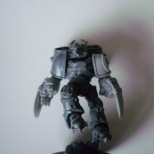 The plan was of course to make my own Night Raptors without paying more than £37 for them.  I think that by the time I’ve added up the cost of the project I spent around £32.  In the end, whilst I like the figures I made, I’ll be making the extra investment to buy the Forgeworld version.  (In fact I already did…)

So that leaves me with 66 Infantry (I know it’s a trap right?) and 1 Vehicle!  Must paint some for next week!

In other news I finished the Dark Angels figures we’ll use to play Betrayal, except we’re going to call it Conflict at Tsagualsa!  I just have to Anti-Shine the Terminators and we’re ready to play!

So until next week, keep painting! – Mark